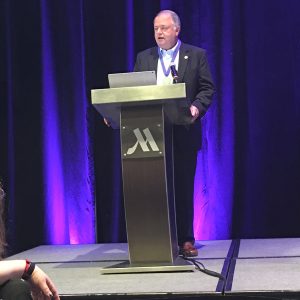 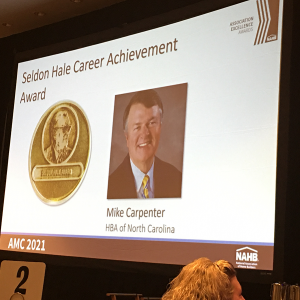 Former Executive Vice President Mike Carpenter was named the 2020 recipient of the prestigious Seldon Hale Career Achievement Award presented by the NAHB Executive Officers Council at its Association Management Conference in Minneapolis, MN on August 4, 2021. Mike was recognized for his outstanding service to NCHBA over the past 32 years.

Mike was hired in 1989 to create an in-house governmental affairs program for the association which he headed until 1999. He then was named NCHBA’s Executive Vice President where he led the association until last December. Mike currently serves as General Counsel for the Association and continues to represent NCHBA at the General Assembly as a key member of our legislative team.

“I am extremely proud of what Mike has accomplished for NCHBA, both as a leader and lobbyist,” said Tim Minton, NCHBA’s Executive Vice President. “While he has accomplished so much for us, perhaps his most significant achievement is transforming NCHBA into a legislative and regulatory powerhouse. He has been a mentor to me for nearly three decades, and it has been an honor to work with him.”