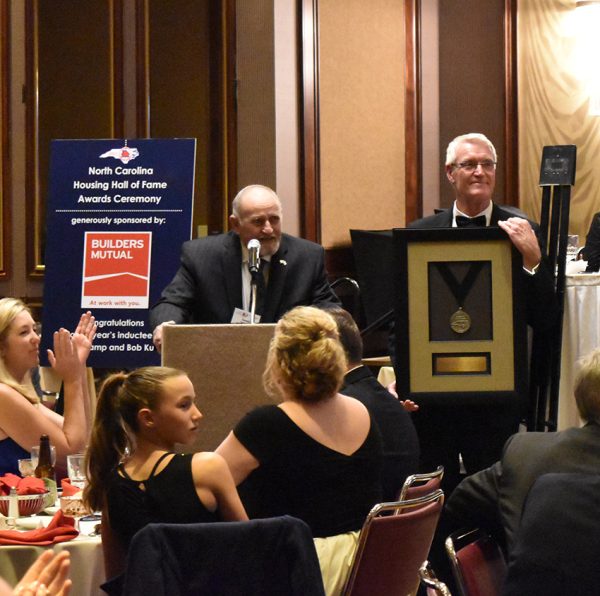 Gerald Kamp (pictured left) addresses the crowd during his induction into the North Carolina Housing Hall of Fame in 2017.

Kamp’s career as a home builder spanned more than four decades, in which time he built nearly 600 homes in the Catawba Valley area. Kamp was a fixture of the HBA of Hickory-Catawba Valley, where he was a charter member and served as president three times. For his unrivaled record of service, the local HBA named one of its highest honors The Kamp Award.

Prior to starting his business, Homes by Gerald Kamp, he served in the Air Force for 12 years as well as North Carolina National Bank in Charlotte.

Kamp was inducted into the North Carolina Housing Hall of Fame in 2017, joining a distinguished group of individuals who have made profound and lasting contributions to the residential construction industry in North Carolina.

“Gerald Kamp exemplified service,” said Tim Minton, NCHBA Executive Vice President. “Whether through the HBA of Hickory-Catawba Valley or at NCHBA, where he contributed to, and led, numerous committees, Gerald was always willing to say “Yes” when asked to give of his time and talents.”

A funeral service will be held Tuesday, April 12 at 3 pm at Hickory Funeral Home.