The Governor and leaders in both the House and Senate worked out a compromise this week that will reopen schools within the next 21 days. The legislation will require all school districts to formulate a plan that will provide in person instruction for all students in accordance with safety protocols. With this huge issue now off the table and last week’s passage of the state’s COVID-19 bill, legislators will now have additional time to devote to many of their legislative priorities.

NCHBA’s legislative team had their first bill drop in the House this week. House Bill 273 Modify Builders Inventory Tax Exclusion was introduced by Representative(s) Larry Potts (R-Davidson), John Bradford (R-Mecklenburg), Jeff Zenger (R-Forsyth), and Ashton Clemmons (D-Guilford). The bill seeks to expand the builders inventory exemption that passed in 2015 to townhouses. Despite the original intent of the bill, the Department of Revenue concluded that townhouses were not included. The original bill exempts from the property tax the increase in value of real property held for sale by a builder to the extent the increase is attributable to subdivision or other improvement. The definition of “builder” is a taxpayer engaged in the business of buying real property, making improvements to it, and then reselling it. Thus, both developers and home builders would qualify for this tax exclusion.

The House Regulatory Reform Committee held a “discussion only” meeting concerning House Bill 141 Promote North Carolina Sawmills. The bill would allow ungraded lumber to be used in limited construction situations. The lumber would be required to meet building code standards and could be used in the construction of a personal home if purchased directly from the mill.  Members of the committee are expected to vote next week on the passage of the bill.

Representative Bobby Hanig’s (R-Currituck) House Bill 110 Increase Building Permit Building Threshold legislation that would raise the building permit exemption from $15,000 to $20,000 passed the House Finance Committee this week and now heads to the House Rules Committee. This exemption was last raised in 2015.

House Bill 184 Support Private Property Rights passed the House this week after being heard in the House Judiciary and Rules Committees. The bill clarifies that the inclusion of real property on a comprehensive transportation plan is not a required disclosure during a real estate transaction. Representative Kelly Hastings (R-Gaston) is sponsoring the bill to help alleviate landowners concerns that the Department of Transportation is tying the hands of landowners over the potential of future roadway corridors. The bill now heads to the Senate.

Representative(s) Jeff Zenger (R-Forsyth) and Larry Potts (R-Davidson) introduced legislation this week that would speed up the commercial plan review process. HB 291 Building Plan Approval-Certain Commercial Projects would create certain timelines for the approval process of plans and enforce a penalty if those plans are not approved in a timely manner. As currently written, the local government would have 15 days to approve the plan or the fee for plan review would be reduced by 10% daily.

Next week, NCHBA expects to see the introduction of several HBA supported bills. Some of the items that will be in those bills include changes to current land use laws and another Building Code Regulatory bill.

Finally, as more and more legislators turn their attention to career education, the SPEVCO organization brought a teaching tool to the General Assembly this week. The BE PRO BE PROUD truck will be used as a tool and will go directly to high schools in an effort to educate students on the career opportunities that exist outside of a traditional four-year degree. NCHBA staff toured the exhibit in an effort to support increased career opportunities for high school students. 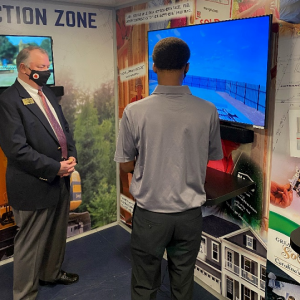 General Council Mike Carpenter tours the components of BE PRO BE PROUD Career Education Truck that was at the General Assembly last week.

If you need any help with issues you are facing, please reach out to our staff. We stand ready to help. If you have any questions about this report, please email Steven Webb at swebb@nchba.org.